Funding provided by: National Institute of Standards and Technology

Firefighting personal protective equipment (PPE) has evolved through significant technological improvements over the past half century. Enhanced thermal protection from modern PPE and the introduction of self-contained breathing apparatus (SCBA) has enabled firefighters to work longer and more efficiently in immediately dangerous to life or health environments. Despite these advancements, performance limitations remain in many parts of the turnout gear ensemble. In particular, the SCBA facepiece represents a critical potential failure point, as a compromised lens can result in loss of vision, facial and airway burns, and other injuries associated with the inhalation of products of combustion. It has been speculated that repeated exposures to mild to moderate thermal exposures may cause a change in the mechanical properties of the SCBA facepiece lens material, potentially weakening the mask and precipitating a catastrophic failure of the lens.

To address this concern, a new laboratory instrument has been constructed to provide repeatable cyclic thermal exposure for SCBA facepieces building on the existing NIST radiant panel apparatus that has been adopted by the NFPA 1981 standard. With this automated system SCBA facepieces were exposed to a variety of radiant heat flux conditions (NIST Thermal Classes I-III) for up to 100 cycles. After thermal exposure, quasistatic and dynamic mechanical testing has been conducted on samples harvested from the exposed masks (and those worn in the field for comparison), while other exposed masks were subjected to NFPA 1981 Lens Radiant Heat test. Additionally, the air around the facpeices were sampled to determine if any chemicals of concern were offgassing while the masks were being heated.

For the SCBA masks produced prior to the 2013 version of the NFPA 1971 standard, repeated exposure to Class I and II heat fluxes do not have a significant effect on thermal damage or mechanical properties compared to unexposed samples. However, at the 5 kW/m2 condition (Class III), microcracking was consistently observed in by 10 cycles and continued to extend in the 100 cycle samples. Substantial reductions in ductility were noted after 100 cycles, with changes in mechanical properties that were similar to those measured in the field worn samples. There does not appear to be a one-to-one correlation between visual indications of thermal damage and reduced mechanical properties. However, if an SCBA facepiece shows visual indications of thermal damage or has been repeatedly exposed to Class III environments, the unit should be closely inspected and replacement considered.

Lenses certified to the 2013 edition had higher tensile strength and absorbed more energy but were more brittle than the 2007 edition materials. Off-gas testing from the SCBA facepiece lenses showed no measurable polymers being released under typical  fireground conditions using the GC-MS technique employed. 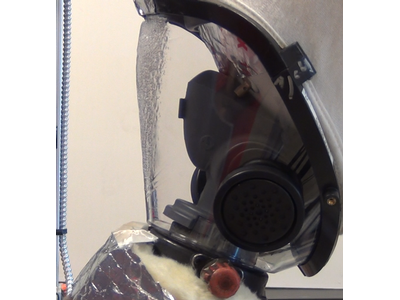 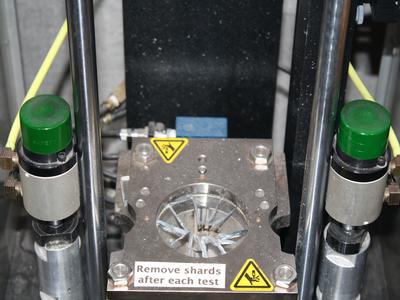